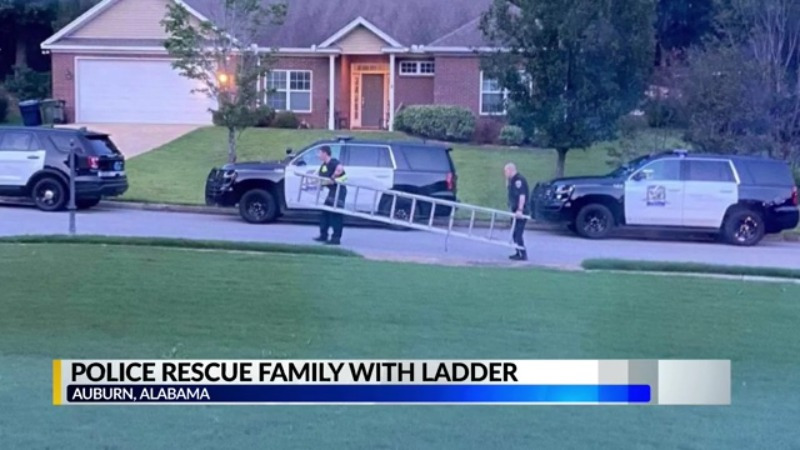 AUBURN Ala. – A heroic rescue over the weekend casts the spotlight on the Auburn First Responders who risked their lives to save others during a police standoff with an armed suspect who had already fired at police. Auburn’s Chief of Police Cedric Anderson, Shift Supervisor Lieutenant Cody Hill, and Auburn Firefighter Andrew Kiser used a ladder to rescue several family members during a standoff Sunday night with an armed suspect.

Sunday, July 15, at 7:00 pm, Wedgewood Court received a call about domestic violence. Investigators say that an Auburn officer approached and was confronted by a man carrying a gun. The suspect fled the scene and refused permission for them to leave. Investigators quickly discovered that the suspect was a member of a family who was trapped upstairs.


ALEA Trooper involved in wreck on I-65 in Limestone County

“I can’t describe how much compassion I saw on scene and how many acts of courage I saw out there as well, not only by first responders but by the citizenry. We live in a great community, ” said Assistant Police Chief Clarence Stewart.

“It was a great team effort, on everybody’s behalf. If it were not for Auburn Fire having that ladder, it would have made it more difficult for us to be able to extract those family members from that second-story window,” said Stewart.

After the family left, Lee County SWAT entered the home and found the suspect. The suspect was suffering from a gunshot wound. He was transported to Baptist South Montgomery, where he is currently in stable condition.

News 3 is awaiting information from the Alabama Law Enforcement Agency for the suspect’s name and charges.

Domestic violence calls are some of the most serious calls that law enforcement officers receive. Auburn Police Department is very aware of this. Auburn Officer William Buechner (responding to a domestic emergency) was shot and killed on May 2019. In the shooting, officers Webb Sisrunk (officer), and Evan Elliot (“officer”) were also killed. Both were miraculously recovered. A suspect was arrested. William Buechner, the Alabama law that makes killing a first responseer a capital offense, is the name of this suspect.