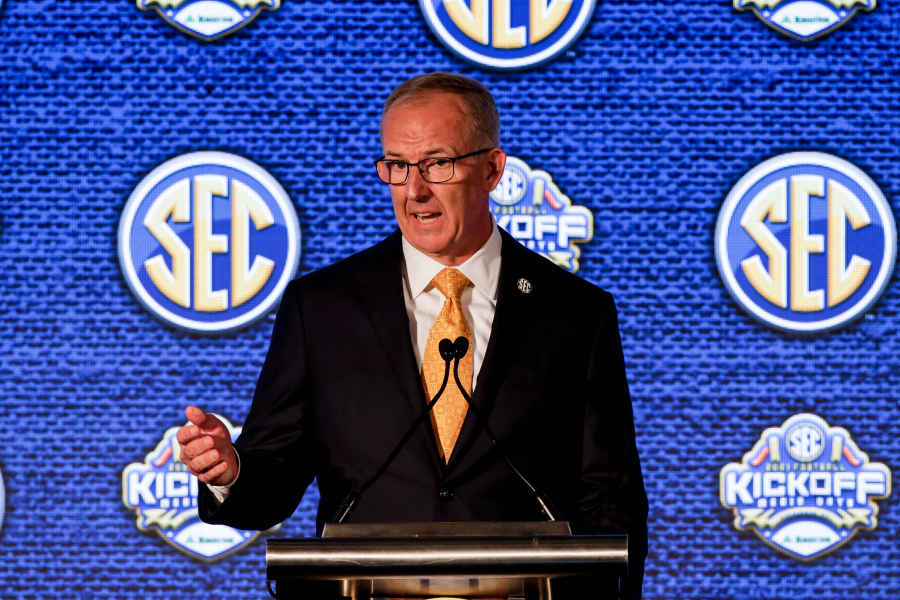 Texas and Oklahoma made a request Tuesday to join the Southeastern Conference — in 2025 —- with SEC Commissioner Greg Sankey saying the league would consider it in the “near future.”

The wheels are moving in the right direction for a huge move in college athletics, but the Longhorns or Sooners are not yet free agents. And it’s doubtful they want to wait until the contract that binds them to the Big 12 for four more years runs out to bolt to the SEC.

It may not be in Big 12’s best interest to have two lame ducks in conference for much longer than the 2021-22 schoolyear.

“It’s similar to a divorce, but it’s business relationship where multiple parties realize that they just can’t be together anymore,” said Darren Heitner, a sports and entertainment attorney based in Fort Lauderdale, Florida. “You try to come to a resolution where perhaps nobody feels great about it, but at least there’s something where they feel as though they’re getting some fair value out of the equation.”

The schools made public their intention to join the SEC for the first time after Texas and Oklahoma notified the Big 12 they would not extend a grant of media rights beyond its 2025 expiration date.

Oklahoma and Texas sent a joint letter to Sankey, requesting “invitations for membership to the Southeastern Conference starting on July 1, 2025.”

“We believe that there would be mutual benefit to the universities on the one hand, and the SEC on the other hand, for the universities to become members of the SEC. We look forward to the prospect of discussions regarding this matter,” the schools said in a letter signed by each university’s president.

The grant of rights that ties Oklahoma and Texas to the Big 12 and its eight other members runs concurrently with the conference’s billion-dollar television deals with ESPN and Fox.

Big 12 bylaws state members leaving must give 18 months’ notice and pay an exit fee equivalent to two years’ worth of revenue distributions.

The pandemic resulted in a drop in revenue distribution to the Big 12, which fell to $34.5million per school. But it was closer than $40 million per school before the downturn. This could lead to Oklahoma and Texas purchasing approximately $80 millions each.

Other revenue losses caused by their departure could also affect the schools.

Although the Big 12 appears to have a lot of leverage, it must rebuild quickly if it wants to be able to offer stability in negotiations for its next television contract.

“If you’re the Big 12, you understand perhaps you have some leverage here based on the fact that there is an existing contract, but ultimately pushing hard on that contractual arrangement and either forcing the parties to remain situated as is or actually litigating if there is a breach is less desirable than peacefully resolving behind closed doors,” Heitner said.

The SEC is expected to expand to 16 teams, including Texas and Oklahoma. This is despite the fact that half of these teams have won at least one national football championship since 1980.

The SEC’s most recent television contract with ESPN, set to take effect in 2024, is expected to increase revenue distribution to its member schools to about $67 million per year.

During SEC media days in Hoover (Alabama), the news of the Texas-Oklahoma talks and the SEC was reported last week.

“The events of recent days have verified that the two schools have been contemplating and planning for the transition for months and this formal application is the culmination of those processes,” Big 12 Commissioner Bob Bowlsby said in a statement Tuesday.

Sankey’s first public acknowledgment of the situation was careful to mention the SEC did not initiate talks with the schools.

“While the SEC has not proactively sought new members, we will pursue significant change when there is a clear consensus among our members that such actions will further enrich the experiences of our student-athletes and lead to greater academic and athletic achievement across our campuses,” Sankey said.

Heitner stated that the SEC doesn’t want to be involved in a messy divorce and is not accused of actively trying cause it.

“If the SEC actually reached out first to Texas and Oklahoma with the intention to gauge interest and perhaps provide an offer, that could create a foundation for a tortious interference claim and put the SEC at issue of legal exposure,” Heitner said.

The SEC’s next action is to vote on whether to extend an invitation to Texas and Oklahoma. According to the SEC bylaws, at least three-fourth (11 of 14 members) must vote for an invitation to a new member. The SEC presidents will meet on Thursday, but it is not clear if they will vote.

Both Oklahoma and Texas’ boards of regents announced Tuesday their intention to meet Friday, with conference affiliation on both agendas.

The Big 12 was born from a merger of the Big Eight Conference with the Southwestern Conference in 1994. It began play in 1996. Texas and Oklahoma are the conference’s most notable brands. They have the most successful and richest athletic departments and are the only Big 12 schools that have won national college football championships.

“We are unwavering in the belief that the Big 12 provides an outstanding platform for its members’ athletic and academic success,” Bowlsby said. “We will face the challenges head-on, and have confidence that the Big 12 will continue to be a vibrant and successful entity in the near term and into the foreseeable future.”

Follow Ralph D. Russo at https://twitter.com/ralphDrussoAP and listen at https://APpodcasts.com